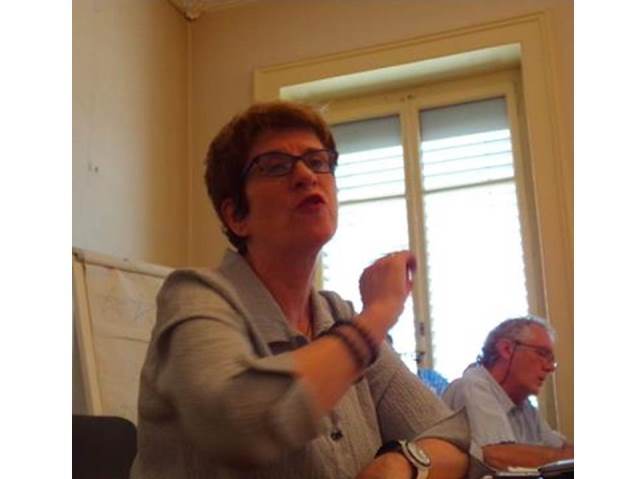 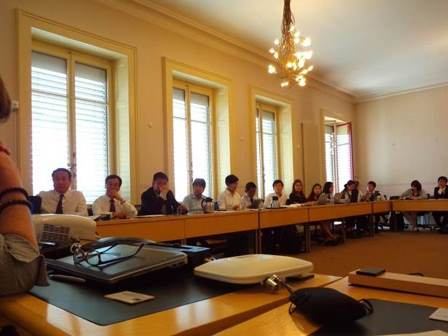 Deputy High Commissioner Gilmore saw real benefit in the academic collaboration with East Asian scholars and first opened the floor for the commentators.

Prof. Ai Kihara-Hunt of the University of Tokyo, Japan, inquired with the Deputy High Commissioner how the UN-OHCHR was dealing the global trend of retreat of human rights, and what its strategy is in tackling the issue of globally shrinking space to speak up for human rights. In particular, the speaker asked if there was a way of collaborating with the group, who share two common features: they are East Asians, and they are academics. 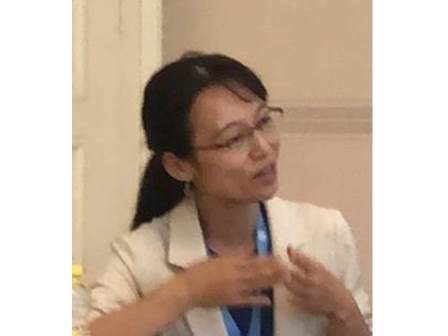 In presenting the trend of retreat, Prof. Kihara-Hunt mentioned that examples of the rise of populism needed no mention among the informed participants. In more States, vindictive and xenophobic rhetoric of populism were more apparently and bluntly in the face of the general population. It was at multiple levels, from the government policies to the public’s attitude toward outsiders, and worryingly, this trend was even in the laws and regulations, through which more discrimination appears to be legitimized.

In the case of Japan, too, the government’s survey on the public awareness of human rights, suggested that the vast majority of the Japanese population are aware of human rights, noting that the topics that they inquired about were mostly concerning categories of persons who may face discrimination but did not other substantive topics, such as death penalty, freedom of opinion and expression, sexual violence, ill-treatment against foreign workers, immigration. Rights and freedoms are necessary to create democratic space for everyone’s human rights.

She encouraged East Asian scholars to contribute to the endeavor of maintaining and regaining space for human rights. 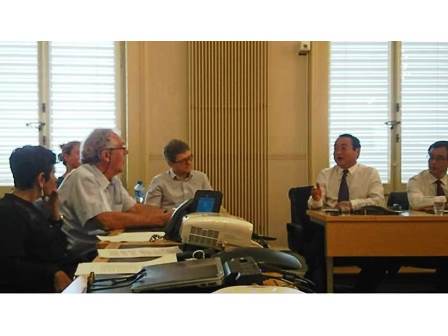 Prof. Sheng of China asked if there is a gap between the Office and the people in the field, referring to the human rights situation of women and children in Central African Republic. He also asked how much impact the US’s withdrawal from the Human Rights Council has.

Professor Changrok Soh of Korea University thought there should be an East Asian dialogue about human rights, even if this does not happen at the State-level. He recommended that Universal Periodic Review (UPR) be used as a topic of discussion among the East Asian scholars.

Mr. Inuzuka, former member of the Japanese Diet, wondered what the Responsibility to Protect concept would be in relation to peacekeeping in the era of President Trump. 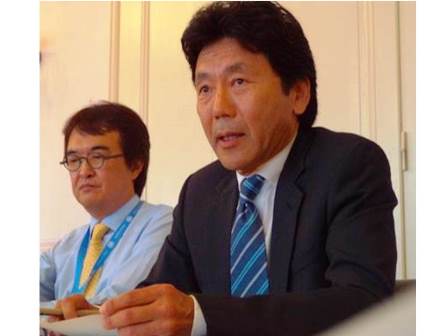 Deputy High Commissioner questioned whether human rights are really in retreat, and if so, by what measure would we assess this to be the case? After all, the Universal Declaration of Human Rights, signed 70 years ago, has since been included in almost every new national constitution established subsequently; the majority of UN member states being constituted post-WW2. There are now laws in countries all over the world that reference the contents and/or values and/or purposes of the Declaration enabling the cascade of human rights from the universal and the global to the national and the local. 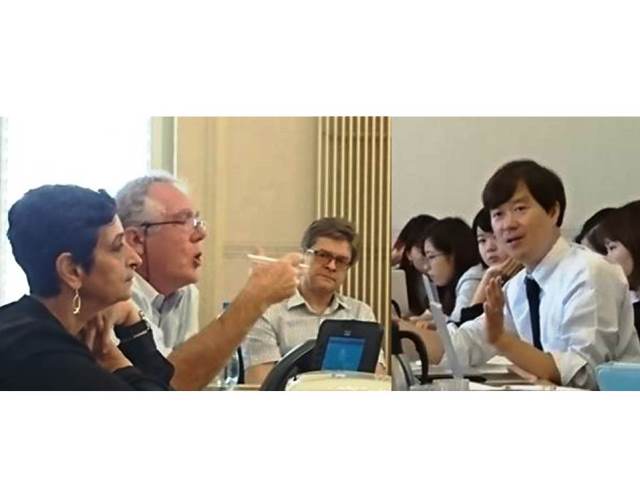 The Universal Periodic Review (UPR) is concrete evidence of this universal engagement in human rights, having now passed through two cycles with which all States cooperated while, for example, the Rome Statute establishing the International Criminal Court with jurisdiction over international crimes, is further evidence that never before has the world been so aware of human rights; of those who are lost to human rights violations and of States’ potential for abuse of power and their obligations to relative powerlessness. Never before have we known so much about the nature and causes of preventable human suffering; never before has so much evidence been collected about the violations/abuses of human rights; never before has there been so many forums in which evidence of these matters can be put before member states. These are not the circumstances of defeat or of retreat. That being said, there is no question that political discourse has deteriorated: political narrative about universal rights has worsened as has the moral character of that political discourse.

She further emphasized that claims for rights to be upheld were not in retreat. Human rights defenders continued to demand for human rights. The number of people documenting human rights evidence has increased. There is a broader based clash between people’s demand for rights and the State’s efforts to “supply rights”. She expressed her opinion that it was important to challenge current negative political narratives, by building coalitions to amplify the demand for rights. She noted specifically that what is under assault are not only values, but also the place of fact and of evidence. The norm that public policy should be based on evidence and on impartial standards was under assault.

How this retreat from the disciplines of standards, norms and evidence-based policy making has an impact is clear in peacekeeping. The UN is overdependent on certain donors; it has its political economy that affects its policy making including in respect of fulfilling its mandate in times of conflict.

Times are changing. There are more people than ever on the move. Climate change is a local problem with only global solutions. Inequality is the gravest threat to enduring peace. There are alive today more young people than ever before in human history. All of these – and many more – directly concern people and where ever people are concerned there are inevitably human rights concerns. We all must do more to elevate the demand for rights, including in East Asia. Geneva itself – alone – is not the answer. The answer will always involve a key role for local social movements. She concluded that we all have rights – without exception – but that not everyone has the same degree of responsibility for rights. The more power one has, the more responsibility we have to defend, protect and uphold rights. 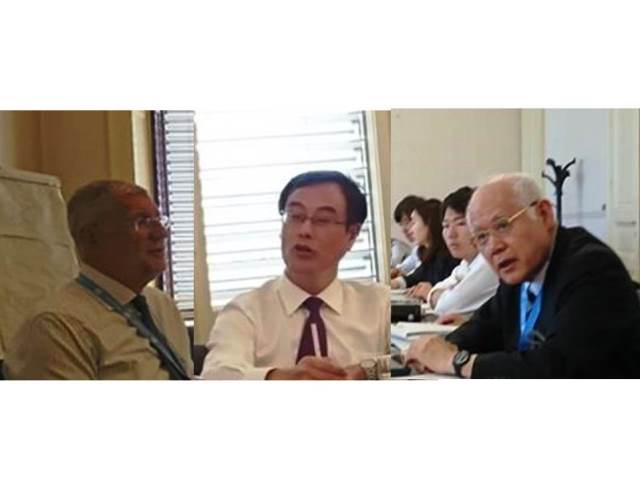 Concerning the Universal Periodic Review, Mr. Gianni MAGAZZENI, Chief of the UPR Branch, Council and Treaty Mechanisms Division (CTMD), explained that while the Universal Periodic Review (UPR) takes place in Geneva its main objective is to improve the human rights situation at country level. It is a peer review of every member state, which benefits from the contribution of other stakeholders as well, including independent national human rights institutions and human rights associations active in country as well as regional organizations, if they submit information within given deadlines. For the UPR, hundreds of pages are considered and then summarized in a report of maximum 10 pages. In addition, OHCHR prepares also a compilation of UN documentation, received from UN Treaty Bodies, Special Procedures Mandate Holders, which complement state reports. The UPR has entered its third cycle in May 2017. On average, each delegation is led by one or more ministers with an average number of 20 state officials, and about 100 states making an average of 2.4 recommendations (i.e. more than 200) for each review.

The review takes place in Geneva but the UPR focuses on the implementation and follow up of recommendations – especially those that are accepted – in each Member State. By strengthening national coordination and follow up mechanisms and enhancing the links between human rights requirements and the SDGs States will be able to better address root causes and prevent emergency situations. The UPR has 100% participation record so far: i.e. it is a mechanism accepted by all member states, which come to Geneva for the review. The main challenge in this third cycle is implementation which – if systematically ensured – will greatly enhance prevention and the success and sustainability of the Agenda 2030 and the Sustainable Development Goals (SDGs). The entire UN system, in addition to OHCHR needs to work more with Governments and other national stakeholders in order to support at least accepted UPR recommendations leading to the strengthening of the national protection system and relevant changes in laws and practices. Thus, if human rights are at the core of efforts at the SDGs, all the three pillars of the UN Charter (peace and security, development, and human rights) will be significantly strengthened. 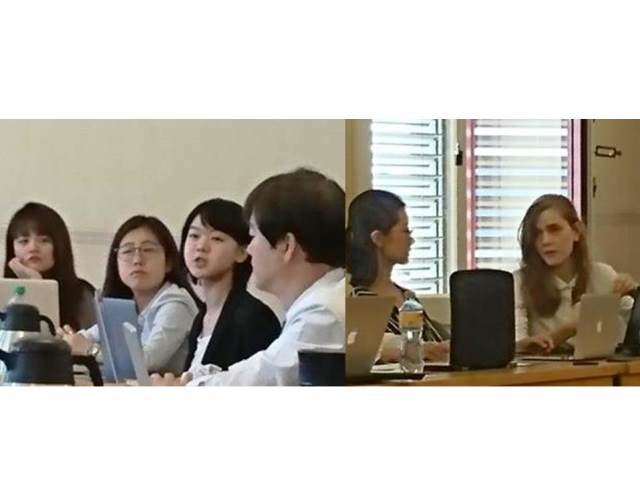