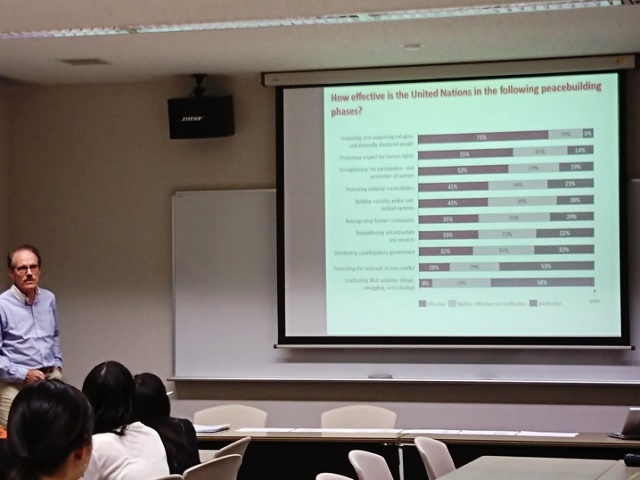 Mr. Stephen Browne introduced the results of December 2014 survey around informed practitioners and academics on their perception of the UN’s performance in fragile and conflict-prone states. The results indicated that the UN is perceived to be doing better in human rights and humanitarian assistance compared to peacebuilding and development. More experienced experts were more positive in their perception of the UN’s effectiveness in its work in fragile states. The speaker informed the participants that it is vital that the UN operates effectively in those states, as 43 percent of the absolute poor lives in fragile states. According to the survey, experts consider most important that there should be much better coordination amongst UN actors at the headquarters’ and in-country levels. There are already promising signs, including Sustainable Development Goal No.16, strong leadership at the Peacebuilding Commission, the new Secretary-General’s commitment to prevention, and some indication of support for sustainable peace within the UN.

His presentation is made available below:

Prof. Hasegawa made a comment that the subject matter involves a change in mindset, and referred to Ms. Sadako Ogata and Mr. Yasushi Akashi, two leading Japanese figures who made a significant contribution to the shift of mindset from peacekeeping to peacebuilding and from international to national ownership.