Participants discussed measures to enhance the collaborative relationship between ACUNS and East Asian countries including the possibility of the ACUNS Liaison Office to facilitate the participation of East Asian scholars and practitioners in ACUNS’ Annual Meetings. 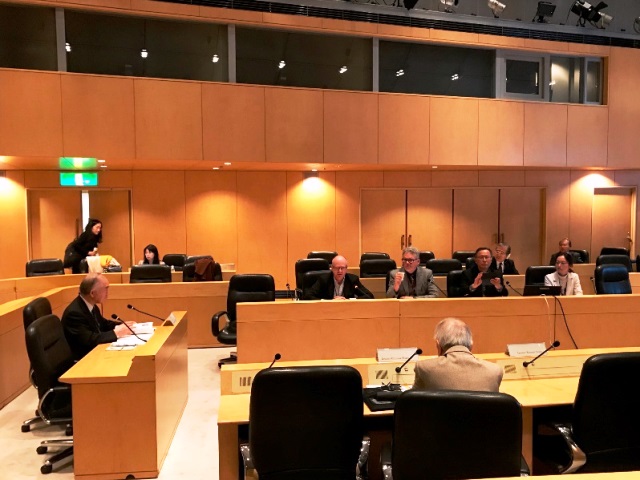 The 17th East Asian Seminar on the United Nations System of the academic councils of China, Japan and the Republic of Korea was held at the Kitakyushu International Conference Center from November 10-12, 2017. It was participated by about 50 scholars and practitioners of the United Nations system.

Ambassador and Professor Takahiro Shinyo, who is President of the Japan Association of United Nations Studies (JAUNS), chaired the session aimed at strengthening the relationship the relationship between ACUNS and the three academic associations, China Academic Network on the United Nations System (CANUNS), JAUNS and Korea Academic Council on the UN System (KACUNS). The session reviewed (1) the ACUNS Annual Meetings and (2) the role of Tokyo Liaison Office.

Mr. Alistair Edgar, Executive Director, announced that starting July 2018 the new Secretariat will take over the ACUNS` management. It will be based at the Centre for Trust, Peace & Social Relations (CTPSR) of Coventry University. He introduced the Executive Director-designate Mr. Math Noortmann. A new editorial board will also be in charge of ACUNS’ journal Global Governance from January 2018. Brigham Young University (BYU) has been chosen as the editorial office, and a new board will be headed by Mr. Ken Stiles, Professor of Political Science in the College of Family, Home and Social Sciences, Brigham Young University (BYU), and Ms. Alynna Lyons, Associate Professor of Political Science at the University of New Hampshire. He then introduced ACUNS events, including annual meetings, and encouraged Asian scholars and practitioners to join.

Mr. Math Noortmann, Executive Director-designate, introduced the changes that he and his new team is planning. One of the changes is to hold annual meetings outside Europe and North America. As a first step, his team is planning to have the 2019 annual meeting in South Africa, and possibly 2021 meeting in China. He also spoke about the plan to establish working groups. The envisaged working groups will be standing groups across the globe, and have connections with annual meetings. He invited non Western scholars and practitioners to join in to jointly bring ACUNS to the next level of excellence.

Ms. Ai Kihara-Hunt, Deputy Director of the Tokyo Liaison Office, introduced plans in the near future. One event will be held on 2 December 2017 at the University of Tokyo to discuss challenges faced in Africa in peacebuilding. Mr. Yasushi Akashi, Former Special Representative for the Secretary-General in Cambodia, will make opening remarks and Mr. Yoshifumi Okamura, Ambassador, Representative of the Government of Japan for International Peace and Stability, will deliver the keynote speech.

Ms. Kihara-Hunt Ai also mentioned that, on 19-20 April 2018, there will be the third meeting of the Northeast Asian Forum on UN Peace Operations, entitled ‘New Directions and New Approaches in UN Peace Operations: The Primacy of Politics and Protection of Civilians’, organized by Friedrich-Ebert-Stiftung (FES) and Academic Council on the UN System (ACUNS). Scholars and practitioners of UN peace operations will come from China, South Korea, and Mongolia to join their Japanese counterparts on this occasion.

Professor Mariko Shoji, Professor at Keiai University, was then called to explain how she had been liaising informally with ACUNS for the participation of Japanese scholars in working group sessions of the ACUNS` annual meetings since 1992. Mr. Sukehiro Hasegawa, Director of ACUNS Tokyo Liaison Office, then mentioned the possibility for the ACUNS Tokyo Liaison Office to facilitate the participation of scholars and practitioners of not only Japan but also other East Asian countries in the ACUNS` annual meetings.