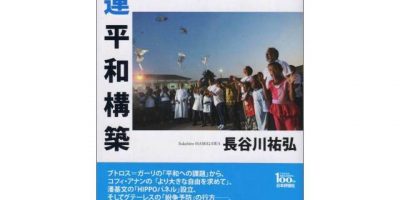 The author who has stood on the front line of UN peace operations reflects the path travelled by Boutros-Ghali with his Agenda for Peace, Kofi Annan In Larger Freedom, Ban Ki-moon`s HIPPO panel and António Guterres` Conflict Prevention, and identifies what makes decisive difference in conflict resolution and prevention.

Quotes from Hasegawa on Post-Conflict Leadership as Key to Building Sustainable Peace and Development.

In April 2016 issue of the UN Chronicle Magazine, former SRSG Hasegawa asserts, the critical task for national leaders is to secure political stability and national unity by influencing the thought and behavior of opponents.

In the 2 April 2016 issue of Asahi Shimbun, Professor Hasegawa suggested that a paradigm shift for Japan to adopt a new way to solve a new problem. Please click here for full text in English.

In his lecture at Yale University and in an interview with the International Peace Institute, Professor Daisaku Higashi elaborated on his views on peacebuilding. For his IPI interview article, please access here.

JICA Vice President Hiroshi Kato asserted that Japan maintained its “consistent” characteristics of its bilateral aid, with its emphasis on socioeconomic infrastructure and human resource developments aimed at poverty reduction, despite of repeated changes in the ODA Charter in 1992, 2003 and 2015.

On 17 January 2014, a book launch was organized at the Palais des Nations in Geneva to mark the publication of Professor Hasegawa’s book, « Primordial Leadership – Peacebuilding and National Ownership in Timor-Leste ». The book launch convened a wide audience from various parts of the UN system and diplomats from Missions to the UN from the region. (Hillel Loew)