In handing out the proposals, Chairperson Hasegawa explained that the spread of the new coronavirus, environmental pollution, climate change, the resumption of global arms race, conflict and terrorism, the widening gap between rich and poor, financial and energy issues, and the like, are no longer can be dealt with the existing global system. The members of the Japan Committee for Global Governance consider it essential for the global political leaders to act with awareness that it is no longer possible to effectively respond to global crises and issues with the home-centered Westphalia system of independent sovereign states. In today’s global community, where rapid globalization is progressing in all areas, the international community need to work as a unitary system to protect the interests of the international community as a whole so that the security and dignity of citizens worldwide could be protected. He explained the necessity of working together with leaders and citizens.

Hasegawa noted that the Japanese people has affirmed their belief in the Constitution that they pray for lasting peace by affirming their belief in the noble ideas contained in the Constitution that govern human relations, and strive to ensure that all people of the world are free from fear and lack, and that security and survival are ensured. He said that now was the time for Japanese to pave the way for a sustainable human symbiosis and work with the people of the world with a new vision of the world in order to achieve sustainable peace and justice in the international community. In doing so, protecting the lives of all people in the international community, in accordance with universal laws of political morality, as well as the security and well-being of the people of their own country, will fulfill the noble ideals and purposes of mankind.

The Chair of the Committee for Global Governance then introduced the recommendations made by Chairs of Sub-Committee on UN Reform, Environment, Disarmament, Parliamentary Diplomacy, Innovative Schemes for Resources Mobilization and Rule of Law.
He said the details of recommendations will be presented and explained by the chairs of respective committees when the Diet Members Committee for World Federalist Movement meet in May 2020. 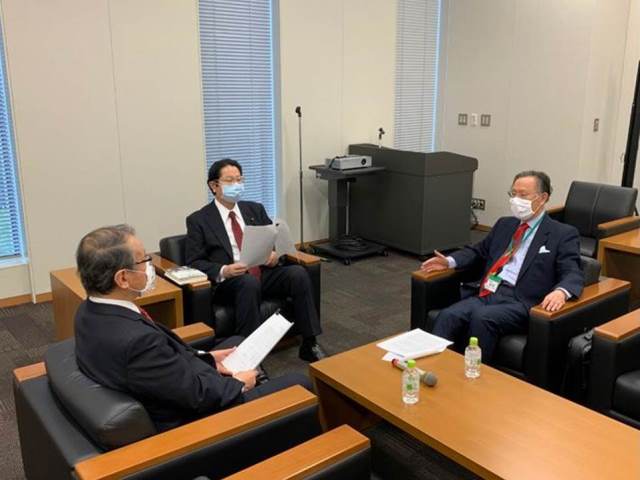 Chairman Seishiro ETO stated that he accepted with much appreciation the suggestions of highly respect experts working at the forefront, and at the same time, he looked forward to receiving further explanations of what the experts recommended. He said that the spread of the coronavirus, which was now facing not only Japan but also many other countries in the world, had created a major global crisis that was seriously affecting the international community. Secretary-General Masaharu NAKAGAWA said that the reality that the international community was facing indicated the need for more effective global governance.