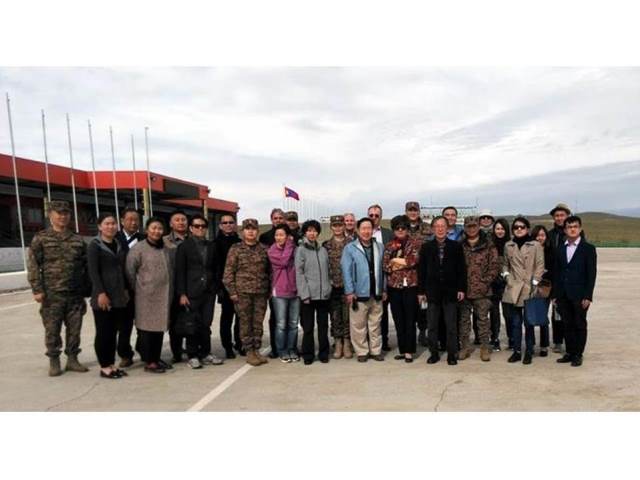 Introductory Session:
Mr. Takakazu Ito (UN) opened the meeting by providing a comprehensive briefing on the Action for Peacekeeping (A4P). He stressed the importance of all peacekeeping stakeholders including Member States, UN Secretariat, international and regional organizations, and the civil society doing their part to strengthen and improve UN peacekeeping. 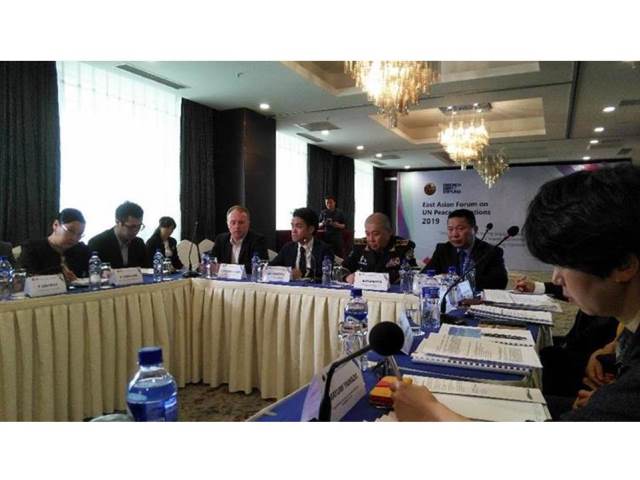 Session 1: Strengthening coherence, sequencing and prioritization of mandates
Mr. Zhu Qiang (China) pointed out the necessity of clear and feasible mandate, and of sharing the situation correctly among the fields and HQ, mentioning the reasonable review process of mandate.
Mr. Sukehiro Hasegawa (Japan) emphasized that the cooperation of each actor is essential to achieve the goal and that to cooperate closely, information of each actor have to be shared through dialogues. He also explained the importance of professionalism in today’s challenging Peacekeeping operations.

Ms. Park Soon Hyang (Korea) also recalled the participants the necessity of clear and specific mandate and of the review of mandate to fit changing situation of ongoing mission through triangular consultation (by SC, TCC/PCC, and Secretariat).

Mr. Bat-Erdene Batkhuu (Mongolia) mentioned the protection mandate as a feature of recent Peacekeeping operations and declared that; to implement protection mandate, we must strengthen partnership with regional organizations, include the factors tend to exclude from the political process. Strategic comprehensive approach is also vital.

[Discussion] All speakers referred to the importance of cooperation for streamlining the missions. 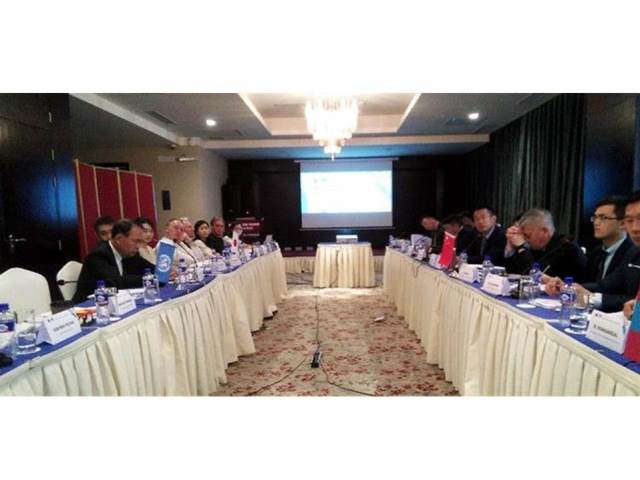 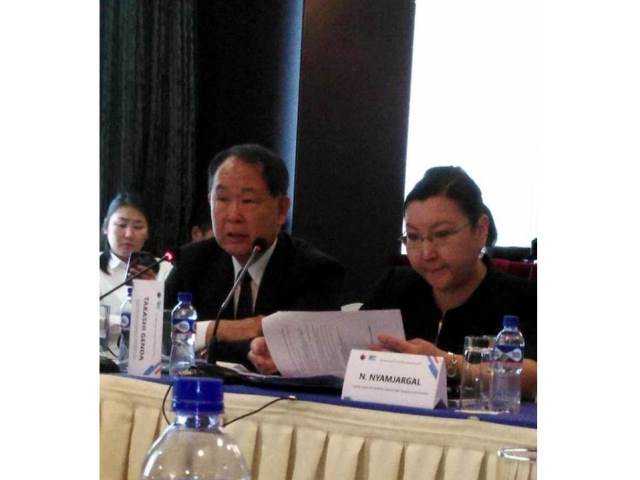 Mr. Kim Pan Young (Korea) suggested the difficulty of providing sustainable and needs-conforming training, for special skills which are not available in usual training are needed in Peacekeeping mission and the needs are changing under situation. He therefore proposed the concept of technology-based training and regional network for effective and sustainable training/capacity building.

Ms. Nyamjargal Nergui (Mongolia) highlighted the need to fit the operational requirement and the required training is vary from each nation’s military according to their skills. She noted the gap between performance and skill should be identified, and current training should be assessed, recognizing the importance of high mobility, agility, and capacity is essential to efficient use of resources.

Mr. Liu Chao (China) pointed out the redundancy of training can be reduced and optimized by sharing experiences and best practice internationally, mentioning Member States’ responsibility for pre-deployment training to be shared. 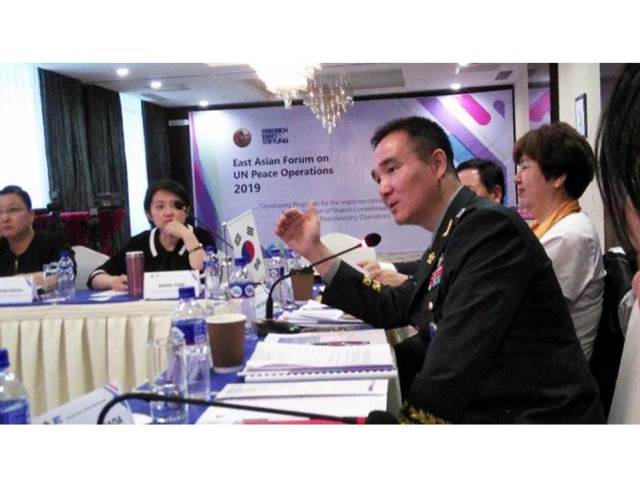 Mr. Enkhbold Rentsen (Mongolia) presented 3 issues as the challenges in today’s Peacekeeping operation; rapid deployment, managing host nation, and assessing new technology. For each issue, cooperation is crucial to maximize the force. He gave an example that Mongolia greatly benefitted in sea transportation by China in co-deployment, since Mongolia, as a landlocked country, doesn’t have major maritime equipment.

Mr. Takakazu Ito (UN) gave a presentation on the UN “Triangular Partnership” launched in 2015 to strengthen UN peacekeeping by addressing capabilities gaps in training and equipment. The “innovative” initiative which was mainly targeting engineering capabilities needs in African TCCs in its first year has now expanded to additional capability areas including signals and medical as well as additional geographical area, notably Asia. With the support of partner Member States, this new UN project succeeded in assisting TCCs deploy their units to UN peacekeeping missions with the necessary training and equipment.

[Discussion] Productive discussion was made on the bases of the concrete proposals and examples speakers gave.

Session 4: Developing an integrated performance policy framework
Ms. Nyamjargal Nergui (Mongolia) highlighted that integration is crucial today, since most of the recent Peacekeeping missions have protection mandates (POC etc) and consist of military, police, and civilian personnel. She provides that each component must understand their own work, other components’ work, and how these interact, recognizing all components share one goal (mandate). She reiterated the importance of identifying gaps and assessing current training activities and mechanism.

Mr. Liu Chao (China) presented that capacity building of TCC should be prioritized. For that, support of regional organizations as AU actively and pre-deployment visit to validate TCC’s capability are of the effective ways. In addition, transparency is essential to develop a balanced integrated performance policy framework.

Mr. Yuji Uesugi (Japan) pointed out comprehensive problems surrounding today’s Peacekeeping operations such as the lack of focus on the local people and the inadequate accumulation of expertise in training on trainer stem from the personnel administration system. 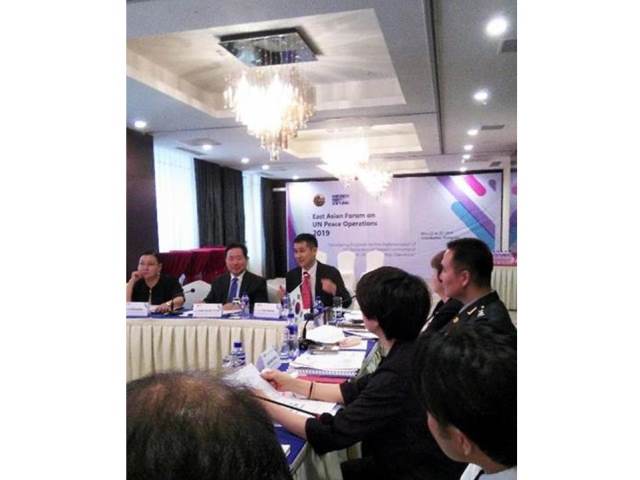 Ms. Park Soon Hyang (Korea) gave some suggestions on how to improve performance in Peacekeeping mission, such as multi-dimensional corporation by strong leadership and data driven enforcing.

[Discussion] The comment was made here the voice of stakeholders is the key to the way forward, suggesting that each actor has own interest, position and role.

Session 5: Developing a clear, comprehensive and transparent procedure on caveats

Ms. Wang Ying (China) analyzed the main cause of caveats (demanding and multifaceted mandates, limited budget and resources, and emerging threads in the mission) and suggested the possible solutions to lessen caveats (improvement of mandate, capacity-building partnership etc.). 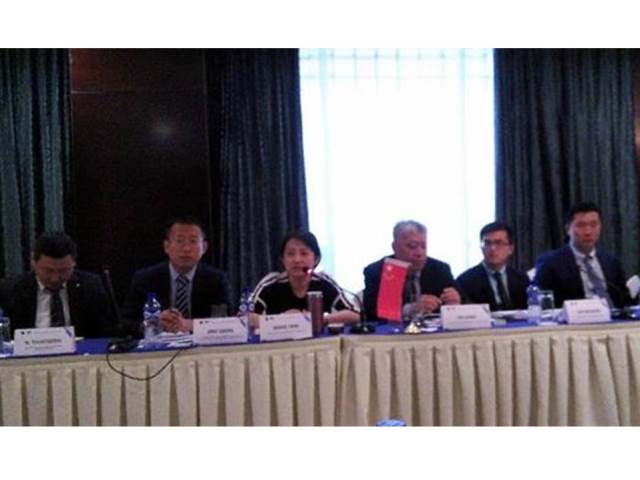 Ms. Mayumi Yamada (Japan) stated that the meaning or scope of caveats become unclear when mandate changes and it may lead the contingents to confusion and disfunction. She pointed out that caveats should be shared widely among the whole UN structure and understood precisely not to lose flexibility of the operation under changing situation. 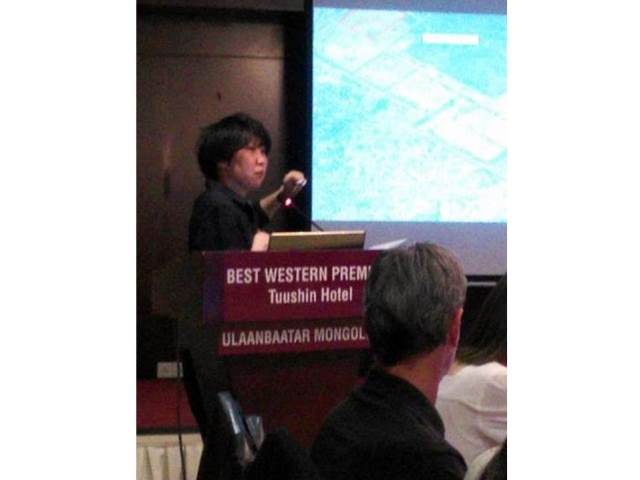 Ms. Park Soon Hyang (Korea) put her point on the need of setting clear definition of caveats in UN so that all actors can share clear policy and procedure on caveats in UN. She also noted that caveats should clearly presented in detail in the beginning of troop deployment.

Mr. Buyanbat Turkhmunkh (Mongolia) stated that when commandar makes decision the caveats matter. To enable contingents act flexible even under the caveats, greater contingency planning as well as high-quality management of the mission is crucial.

[Discussion] Participants, recognizing caveats as obstacles of mission, made realistic discussion with placing caveats as a given premise.

At the end of the concluding discussion, the participants held a group photo session. 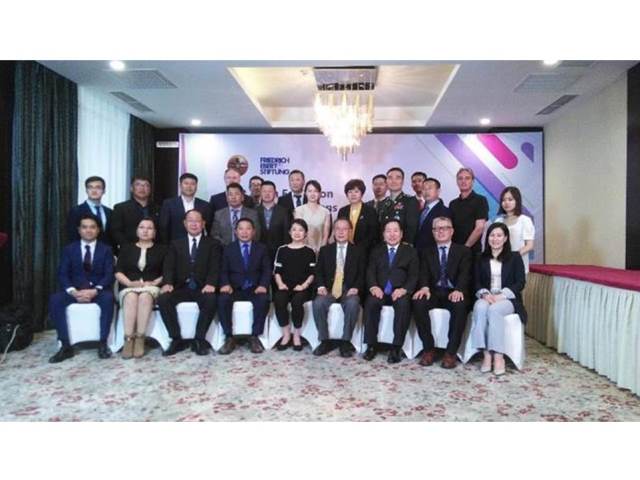 15:30 h Arrival in Tavan Tolgoi and tour of the Joint Training Center of the Mongolian Army 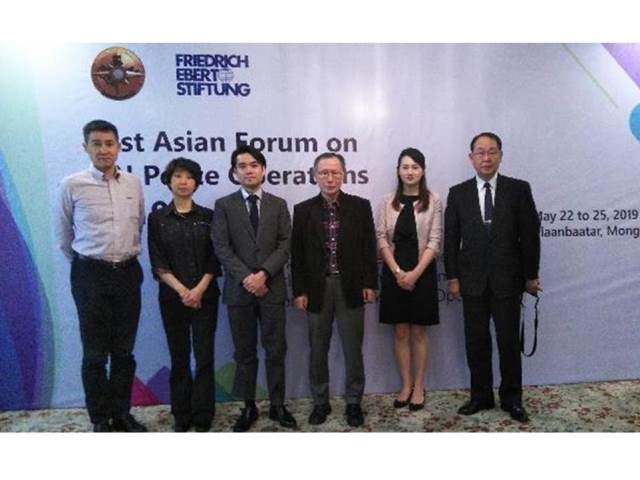