Mr. INOUE, moderator of this session, stated that “Peace” was mentioned several times in the 2030 Agenda for Sustainable Development, especially in its preamble, namely, “There can be no sustainable development without peace and no peace without sustainable development”. Then, he introduced three speakers and topics of their presentations: Prof. Oyamada on Target 16.5 of Goal 16 “Substantially reduce corruption and bribery in all its forms”, Prof. Sugimura on Target 4.7 of Goal 4 “Promotion of a culture of peace and non-violence”, and Mr. Komatsu on Target 16.3 of Goal 16 “Promote the rule of law at the national and international levels, and ensure equal access to justice for all”. Mr. Inoue also introduced two commentators – Amb. Inomata and Prof. Yamazaki. 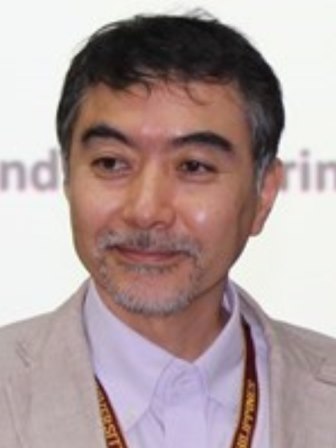 Prof. Eiji OYAMADA, Doshisha University (via Skype)
Prof. OYAMADA reported via Skype from Kyoto. He reported the following points. Corruption is a serious problem in most of the 183 countries surveyed. Anticorruption measures became active in the mid 1990s as a part of Good Governance and democratization. However, various studies indicated that anticorruption reform caused a society significant stress and eventually brought about harmful effects on the society. Political dynamics and the relationship between leaders and followers changed and generated new uncertain factors. There are few studies regarding corruption in post-conflict countries. The consensus has not been reached among practitioners and researchers regarding how anticorruption reform contributes to stabilization of fragile states. There are few explicit guidelines for anticorruption strategy and many researchers decided that efforts against corruption ended up in failure. However, public awareness against corruption has been drastically increased in many countries and we could have great expectation in this point. Implementation of anti-corruption support is difficult because it may be considered interference to domestic political issues and degree of corruption varies in each country. It is also a challenge to fix indicators regarding corruption such as mapping of corruption risk and sectoral probability of corruption.

Amb. INOMATA commented that corruption negatively affects achievement of all other SDGs, therefore, a cross-sectoral approach is essential to tackle corruption issues. He also asked what the most significant determinant of corruption was, and what sort of institutional reform would be needed. Prof. YAMAZAKI introduced her own experience regarding anti-corruption measures and commented that a role of companies as well as a government is important. 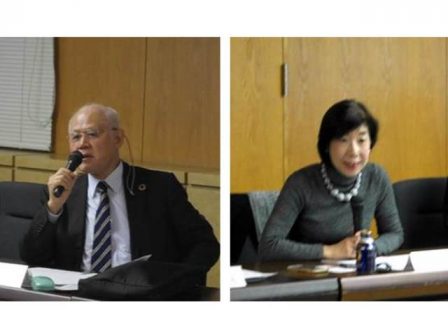 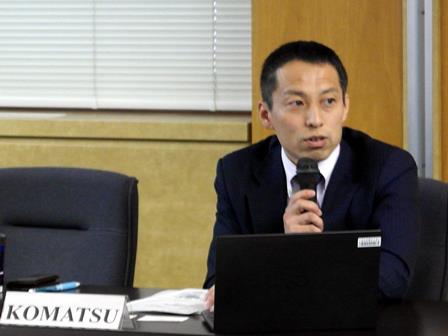 Mr. Kenta KOMATSU, Senior Advisor for Legal Cooperation JICA
Mr. KOMATSU reported on SDGs and JICA’s support to legal and judicial frameworks in developing countries in Asia, Middle East and Africa, focusing on mainly Target 16.3 “Promote the rule of law at the national and international levels, and ensure equal access to justice for all”. Three pillars of JICA’s legal support are: (1) Supports for reinforcing functions of law management institutions (2) Supports for improvement of rules. (3) Supports for legal empowerment. JICA also support capacity development of human resources. Through supporting the rule of law and access to justice, JICA aims to achieve conflict resolution by just and fair procedures. The law with a rational content includes a procedure of participation, guarantee of constitutional rights and a principle of equality, and it eventually leads to conflict resolution based on rational procedures. Supporting the development of laws which providing the foundation of state, however, still have a long way to go. Looking at a current situation of developing countries, it’s necessary to work on a long-time perspective.

In a question period, Amb. INOMATA inquired that supports for the development of laws ought not to be coerced by donors, and to what extent the Japan should support other countries’ legal system. Then, Prof. YAMAZAKI inquired that how the concept of check-and-balance was installed into a legal system in countries under dictatorship of the Communist Party. 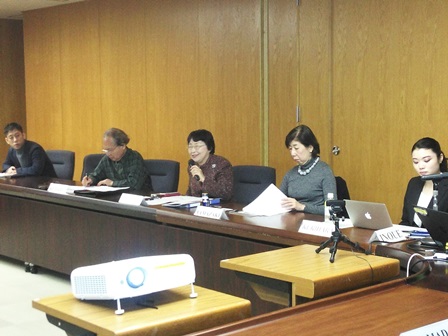 Prof. Miki SUGIMURA, Vice President for Academic Exchange, Sophia University
Prof. SUGIMURA reported the following points regarding education and peacebuilding from broad viewpoints. There are three approaches to peace education: sociological, pedagogical and peace studies. Peace education is established based on these three approaches. In Japan, the activities of UNESCO School have been flourished and currently 1,034 schools are affiliated, and they are functioning as a base for promoting Education for Sustainable Development (ESD) activities. Even though ESD is stated on Target 4.7 of Goal 4, it indeed contributes to achievement of all 17 goals. Furthermore, it’s working on global citizenship education as a means of cultivating human resources for sustainable society and inclusive education to protect human dignity and diverse society. To sum up, the roles of education in peacebuilding are spread of basic education, education to correspond with knowledge-based-society, education for peace and security, and respect for diversity and societal inclusion.

In a question period, Amb. INOMATA commented that education is so important that it could create human DNA. He also said that Japan had the greatest number of UNESCO Schools in the world and this must be a reflection Japan’s adoration towards the UN, but he showed some skepticism that until when it would continue. Prof. YAMAZAKI also inquired how the issue of disparity in this digital society and fake news as a result of diffusion of social media should be addressed from a perspective of education.

Mr. INOUE thanked the three reporters and two commentators for their well-focused presentations and comments. He concluded the session by stating that all 17 sustainable goals are interlinked and interdependent, but we can say that education (SDG) and peace & democratic governance (SDG16) are enablers and accelerators of the entire SDGs.