Timorese Embassy Counselor Nuno ALVES made a detailed presentation on the political and economic developments since 2008, followed by Daisuke Nihei of the Ministry of Foreign Affairs of Japan who provided an analysis of votes received by respective political parties on May 12, 2018. (Report filed by Denishi Joshi)

As the first presenter of the session, Nuno Alvares Moniz Marques ALVES, Counselor of the Embassy of Timor-Leste to Japan, highlighted on the results of early election in Timor-Leste. 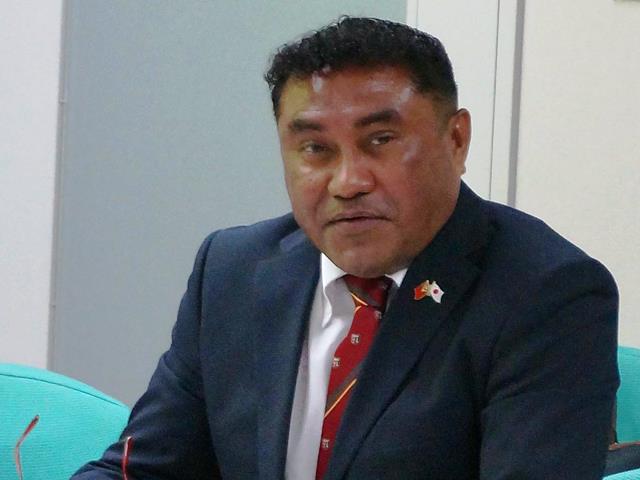 He introduced Timor-Leste as being a new country that had its restoration of independence in 2002 under UN supervision. With a vicious cycle of crisis, the dissolution of national parliament by the President on January 26, 2018 which gave rise to the new election on 12th May marked the latest political development. The result has been that the three-parties, namely National Congress for Timorese Reconstruction (CNRT) led by Gusmão (22 seats), The Popular Liberation Party (PLP) (8 seats) and the youth-based Kmanek Haburas National Unity Timor Oan (KHUNTO) (5 seats) have made a parliamentary alliance for change and progress (which is commonly known as AMP) securing 35 seats in the 65-member legislature.

Although some NGOs complained of about 207 cases of violence that occurred during the election, he declared the latest election in Timor-Leste as ‘a successful one’ with no major confrontation between the contesting parties. He also revealed that the agenda of ‘the promises of stability and economic development’ as being the main reason behind AMP’s victory. The political parties that signed the coalition agreement remained firm on their openness and readiness to host other political parties in the coalition if they agree to adhere to the principles and objectives listed initially.

There were four common challenges faced by Timor-Leste in successfully concluding the elections. The first challenge was to accelerate the process of acquiring materials and safety. The second challenge was related to the use of media and its purpose to educate and appeal all the citizens to avoid void votes. The third challenge was to prepare polling stations outside of Timor as many citizens lived in England, Australia, South Korea and Portugal. The fourth challenge was to hold the election amidst rainfall on the voting day.
With the takeover of the currently functioning legislature, the 8th constitutional government of the democratic republic of Timor-Leste is planned to be formed after June 2018. The swear in ceremony of the new members of parliament will be followed by the formation of the new Cabinet. Thus-formed cabinet will present the budget of the New Fiscal Year 2018 as well as the other development programs of the government.

It is hoped that the new government will work hard to meet its development goals and build a strong, stable and prosperous nation together with the international community including its close partner Japan. 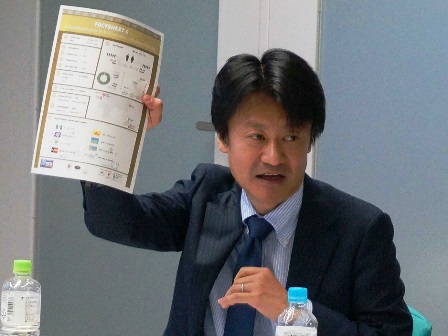 The second presenter of the session, Mr. Daisuke Nihei, Principal Deputy Director, Second Southeast Asia Division, Bureau for Asia and the Pacific, Ministry of Foreign Affairs (MOFA) of Japan presented his findings on the prospect of post-election Timor-Leste. Nihei pointed out that the successful outcome of the election including political campaigning can be seen as the testament to the maturity of democracy of Timor-Leste. The winning of AMP would enable them to establish the single majority in the parliament, which would be the breakthrough of the stagnant political scene. Expectation is getting higher for further consolidating bilateral tie between Japan and Timor-Leste based on the joint statement in 2016.

At first, he gave a figure of the number of votes and the percentage of the total obtained by four major political parties. With a total of 309,015 votes, the AMP coalition is said to have obtained about 50 percent of the votes or a majority. This is followed by FRETILIN obtaining 212,974 votes or about 34 percent of the total votes. The other two parties, namely PD and FDD are believed to have received relatively lower number of votes, 50,034 and 34,279 respectively that account to about 8 and 6 percent respectively of the total votes counted.

Secondly, he highlighted on the observance of elections that were recently held into three different sub-headings: security, logistical management and voters’ education. Regarding overall security, he mentioned that although there were a few reports of verbal attack by the political campaigners, there was no major turmoil between them. He appreciated the cooperation that existed between the police and military to store peace during the election period. He credited the significant role played by STAE for handling logistical management and sharing information among public during the critical period. Finally, he mentioned that the reason behind over 80 percent public participation in voting is due to their increased level of political awareness.

Thirdly, he gave a political perspective in the post-election Timor-Leste. Reflecting upon the confrontation between AMP and FRETILIN, he has labelled the victory of AMP over FRETILIN as being the one with a narrow margin. The duet of Xanana and Ruak seemed to have worked out to some extent to bring about this kind of election results. The challenge that lies ahead is on who would establish a major ruling coalition. Taking into reference the ongoing political events, it is likely that APM would establish a single majority which would then give a breakthrough to the stagnant politics of the country.
Lastly, he focused on the prospect of Japan-Timor-Leste relations in the future. He highlighted on the joint press release that was made in March 2016 between Japanese Prime Minister Abe and the then President of Timor-Leste Matan Ruak. He understood this alliance to have shifted the policy from “cooperation for post conflict reconstruction” to “cooperation for growth and prosperity.” At the same time, he also noted the contribution Timor-Leste has been making to meet Japan’s energy security needs. Talking about the future bilateral relations between Japan and Timor-Leste, he outlined three main points. First, as the expectations are increasing after the recent election results, there is a possibility to consolidate the bilateral ties based on the 2016 statement. Second, the maintenance of political stability in the post-election Timor can create a positive environment for trade, investment and economic cooperation. Third, in parallel to the above-mentioned two objectives, the cooperation can further extend in the field of humanitarian assistance, disaster relief etc.

Comments by the discussants and participants:

After these two presentations, Prof. Kihara-Hunt Ai introduced two discussants for the session.

The first discussant was Professor Yoshitaka Hanada, Former Ambassador to Timor-Leste and Professor of Global Security Center of the National Defense Academy. He mentioned 3 points were crucial. First, rivalry relations. Politics of Timor-Leste was led by two leaders, Xanana Gusmão and Mari Alkatiri. The relationship between two has not been always calm. If tension amounted, Timor-Leste destabilized, if it calmed the country stabilized. Since 2012, after withdrawal of PKO, the relation between two turned improved.

Third, change of the society. With high birth rate, constituency of Timor-Leste is drastically changing. Younger generation, who do not know the difficult period of the struggle against Indonesia, now occupy more than 60 percent of the population, and are not satisfied with economic policy driven by Alkatiri, Gusmão, and even by Araujo. The leaders put emphasis on “big projects” but the young claim improvement of life standard. How to cope with the demand by younger generation must be crucial for further stability of the country. 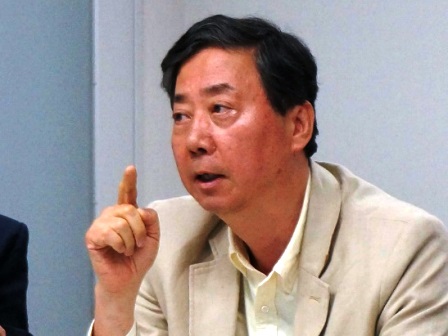 The second discussant was Mr. Ken Inoue, Former Director for Democratic Governance, United Nations Mission for Timor-Leste (UNMIT) and JICA Senior Advisor on Democratic Governance. He focused on the current situation and stated that democratic governance in Timor Leste seems to be working well with its rank 43 in the democracy index in 2017. Then, with his long-time experience working with Cambodia, he shared how the executive body (government), the legislative body (parliament), judiciary (courts), non-state actors and the economy should be functioning to prevent Timor-Leste from falling into the trap of an authoritarian regime. 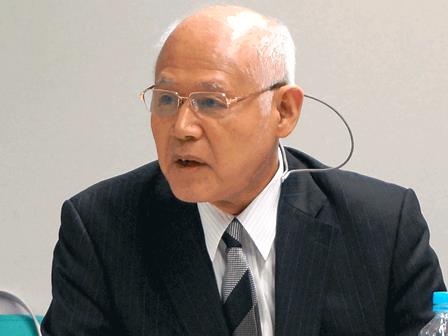 Professor Inomata noted that Timor-Leste is an island country which gained political independence and petroleum resources from Australia, but the country depends too heavily on natural resources for income. Press freedom is respected but they need strong leadership required for real development. 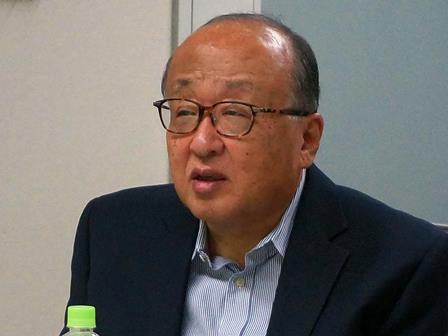 Former Deputy Executive Director of UNFPA and Visiting Professor of Kwansei Gakuin University Kunio Waki pointed out the language is an important factor for nation building. It was reported that Portuguese and the local traditional language were official languages while Bahasa Indonesia and English are widely spoken as working languages.

For the integration of the various sectors of the society the issue of languages to facilitate communications among citizens needs to be given sufficient attention. Waki wondered if the government had a clear vision and policy on this issue. 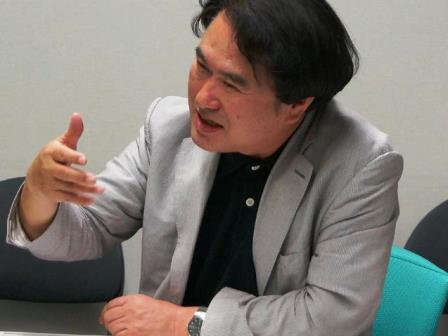 Profesor Masaru Ishizumi, Director of the International Business and Management of Kanagawa University commented on the implications of access to internet and other communication facilities for political and social developments. Young people, he argued, are key agents of social change toward democratization. 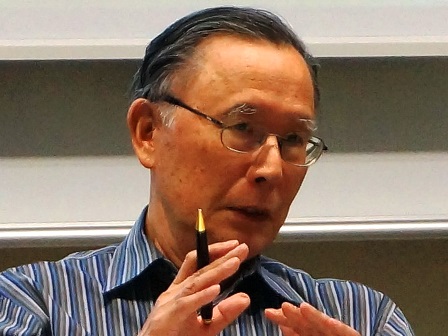 In concluding the session, Professor Sukehiro Hasegawa, President of the Global Peacebuilding Association of Japan (GPAJ) stated the result of national parliamentary elections proved the maturity of democratic governance in Timor-Leste. It was significant that Chairman Xanana Gusmão of the Aliança de Mudança para o Progresso (AMP), a coalition of three opposition parties which won an absolute majority of 34 of the 65 seats in the National Parliament reiterated in his letter to the GPAJ members the commitment of Timorese political leaders to democratic governance. FRETILIN has accepted the ruling by the court about the result of vote counting. Secretary-General of FRETILIN party, Mari Alkatiri, has decided to form a strong opposition in parliament, while prohibiting its members to join in the new Government. Professor Hasegawa then addressed the key issue discussants and commentators raised about the ability of Timorese leaders to bring about the vitality of economy which depended on exclusively on petroleum resources. There was the need to create non-oil sector economic activity and raise the standard of living in rural areas. This depended on the will and capability of Timorese leaders and people – a challenge that will not go away with freedom of expression and mere democratic governance.