Well planned and organized seminar is attended by 30-40 participants who asked about the changing roles of Japan in UN peace operations. 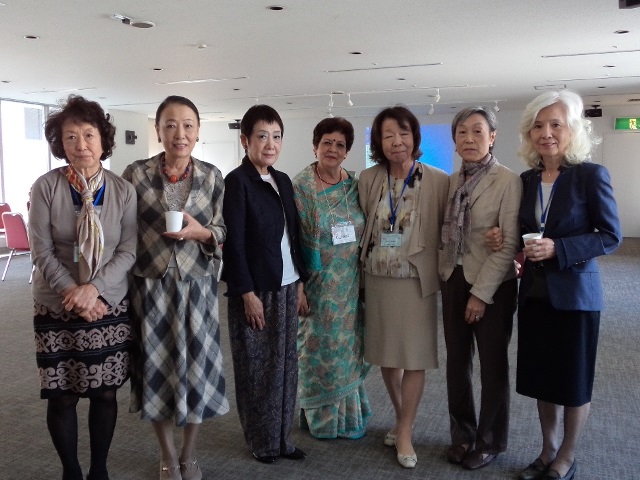 A summary of the presentation and additionalinformation provided by the speaker

The speaker provided the participants with an overview of the transformation that had taken place in UN peace operations. The speaker explained the challenges faced by the UN and the significance of the fourth generation peace operations aimed at strengthening the partnership between the United Nations and regional organizations such as the African Union. This approach, he explained, is considered more appropriate and effective in addressing newly emerging transnational non-state violence that are causing suffering of a large number of civilians and the massive movement of people across national boundaries. 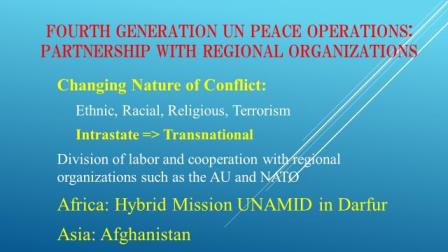 The UN is strengthening its partnership relations with regional organizations such as the African Union. The AU is playing more assertive roles both politically and militarily. The most prominent example of the partnership is the United Nations – African Union Mission in Darfur (UNAMID). In 2007, as a result of the threat to international peace and security from Darfur, the UN Security Council adopted Resolution 1769 authorizing the deployment of the first-ever hybrid peacekeeping operation, UNAMID. This hybrid mission is the first major joint effort of UN and AU. The AU shares the political, financial, logistical and military burdens with the UN. In hybrid missions the partners are theoretically equals and align their agendas to achieve the mandate given by the Security Council of the United Nations. There is a single political representative and a single military commander.

The speaker noted that African countries surpassed in 2014 Asians in providing military and police personnel to UN peace operations. This reflected greater awareness of African leaders that they need to own peace operations and be responsible for managing and transforming conflicts into sustainable peace.

Among Asian countries, the major contributors of military and police personnel have been Bangladesh, Pakistan, India and Nepal. But, China is emerging as one of the key players in UN peace operations. In 2015, President Xi Jinping committed 8,000 troops to the UN peacekeeping standby force—one fifth of the 40,000 total troops committed by fifty nations. China contributes more troops than any other permanent member of the UN Security Council. China has recently begun to provide combat troops, marking a significant change in its deployment profile. Like other countries, there is no doubt that China’s decisions to deploy troops are motivated by its desire to promote its national interests such as oil and other natural resources. But, China is interested in gaining its operational experience in UN peace operations, and secure a positive reputation and high status in the international community. It is noteworthy that China also pledged $100 million to the African Union standby force and $1 billion to establish the UN Peace and Development Trust Fund. It reminded the speaker what Japan did in the early 1900`s when Japan was the largest financial contributor to the UN humanitarian operations in Afghanistan. It is interesting to note that UN officials recognize China for the quality and quantity of its engagement in its support to UN peacekeeping as much as they did about Japan`s contributions when Japan became the top donor in the 1990`s.

Two Chinese soldiers were killed in South Sudan in armed clashes in 2016, but China is keeping its troops in the country as part of the UN peacekeepers. China has been able to withstand the loss of lives of its troop, which Japan cannot due to its public sentiment. Japan should not be ashamed of its government`s commitment to protecting its citizens – be they civilian or security personnel. The speaker explained the need for the Japanese government to protect its people at home and abroad to some of the people who were attending the meeting of the International Association of Peacekeeping Training Centers in Cairo in September 2017. They told him that they wished that their governments would put high value to the lives of their citizens and protect them as the Japanese government does. 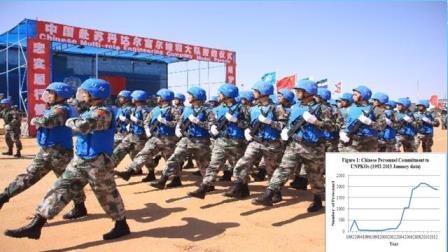 Women are playing more important roles in UN peace operations, particularly in civilian policy planners and managers. They are increasingly active at the UN as they occupy many of senior positions at UN Headquarters and filed missions. 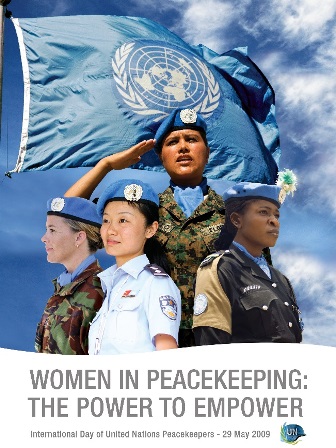 The speaker advised that Japan should do what it can do well that are needed on the ground for securing and building peace. Japan should do more to respond to the calls for help by African and Asian countries to improve their capability. Japan`s assistance to peacekeeping and peacebuilding centers in Africa and Asia is much appreciated by countries of the conflict affected countries. He advised that Japan should provide more technical and training assistance in troop deployment and mobilization. He also noted that there are now many Japanese staff in senior and critically important positions at UN Headquarters and in the field. The Junior Professional Officers and Young Professionals programs have been highly successful in contributing to the management of UN peace, development and humanitarian affairs. South Korea has started a similar program and China is expected to follow the engagement of their youth – male and female – in joining the UN system to contribute to enhancement of peace, development and human rights.

Following his presentation, the speaker engaged in dialogue with the participants of the seminar who asked about, inter alia, the role of Japan. He noted that Japan had been doing right things in providing development assistance and contributing financial resources and personnel to UN peace operations. Japan can enhance its role as an honorable member of the United Nations as declared by Foreign Minister Shigemitsu in 1956 by aligning clearly its motive to action.

According to the speaker, it was a right decision that the Government of Japan took to withdraw the Japan Self-Defense Force personnel from South Sudan in 2017 as armed conflict and violence had increased with the intensification of rivalry among South Sudanese leaders. Japan had sent five years earlier the JSDF engineering group to assist in peace and nation building of South Sudan as Japan had done so to help the peace and nation building efforts of East Timor in 2002. In explaining what he wanted to convey to the participants, the speaker referred to what Immanuel Kant had said: “What matters is motive” and the need to align one`s motive to action. Japan`s motive should be in line with the aspirations expressed in the Charter of the United Nations and the Constitution of Japan as what Japan has done during the last seventy years are right things. The right things Japan has been doing will enhance Japan`s integrity and position in the United Nations as an honorable member if Japan remained truthful to its motive when taking actions.

UNU Women’s AssociationTuesday, 10 October 2017
Changing Nature of UN Peace Operations and the Role of Japan
An outline of a presentation made by Sukehiro Hasegawa, President of the Global Peacebuilding Association of Japan 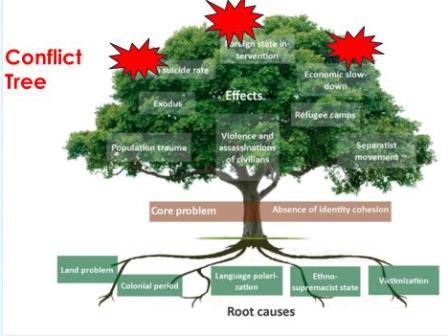