Hasegawa presents Kibeho tragedy or massacre as an unintended consequence of the protection of civilians in theory and practice. 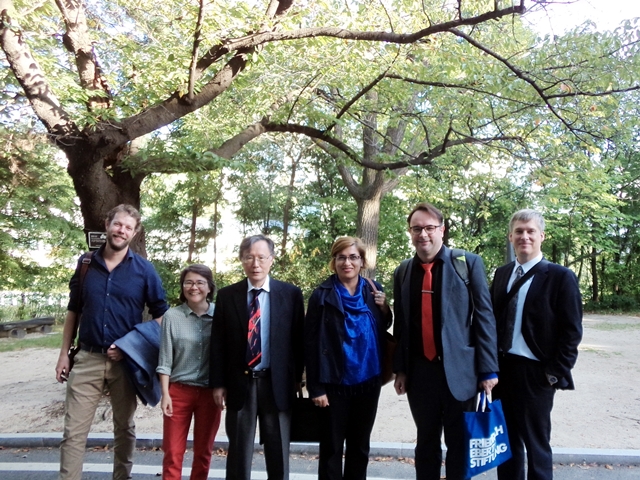 Several scholars and practitioners of peacekeeping activities who were brought together by Meridian 180 examined the implications of the remarks, “UN peacekeeping operations are at the crossroads,” that had been made by UN Secretary General António Guterres to the Security Council in April of 2017. Its concept paper explained that in a situation of constant crisis, not only are UN peacekeeping operations bigger and more expensive than ever, but often peacekeepers operate in an environment where there is no stable peace and where they have to protect civilians. As the Trump administration cuts the UN peacekeeping budgets and a reality where many missions are overstretched, there is a growing gap between mandates and capacities. If peacekeeping is at the crossroads, it is a gnarled and twisted intersection with many possible paths and no easy ones. The meeting is convened to ascertain the effectiveness and efficacy of the peacekeeping operations are going.

From a normative standpoint, the protection of civilians (PoC) is a major challenge, while the responsibility to protect paradigm (R2P) constitute a new framework for assessing the duties owed by those in positions of power and authority (including the UN) to the human security of those who are governed. Between the reports of failure in 2016 and 2017 to protect civilians in the Central African Republic and South Sudan, and serious allegations against UN peacekeeping forces including sexual abuse, a “responsibility while protecting” may be as important as a responsibility to protect. Arguably, the lack of civilian protection, the ongoing scandals and the lack of legal and political accountability are all part of a broader normative identity crisis for UN peacekeeping operations. 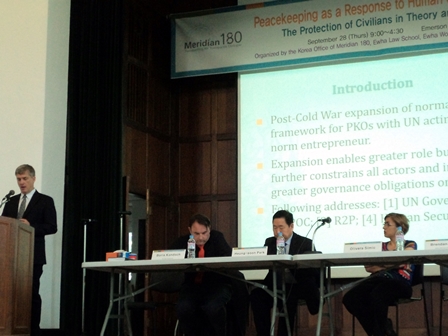 It was against this background that Professor Brendan Howe (Ewha Womans University) and Professor Boris Kondoch (Far East University) made presentations on the normative aspects of UN peacekeeping operations in the Meridian 180 meeting as they had done earlier in the 2017 conference of the Academic Council on the United Nations System (ACUNS). The presentation sponsored by Meridian 180, a multilingual and interdisciplinary platform for policy innovations and solutions with over 800 members who are scholars, practitioners, and policymakers around the world, as part of the work of the Meridian 180 Korea Working Group on Human Security. At ACUNS 2017 Professors Howe and Kondoch agreed on the need for further research regarding how to improve the protection of civilians. 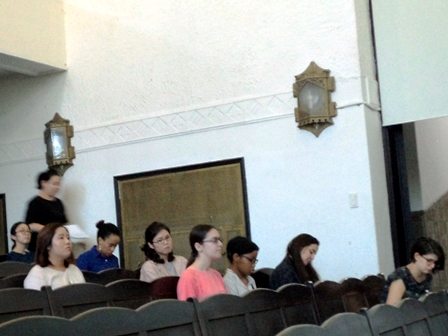 There are a number of challenges to the protection of civilians in peacekeeping operations such as administrative/budgetary constraints, the lack of political will, unclear authority to act, and the lack of sufficient capacity to act. According to a UN Report of March 2014 published by the Office of Internal Oversight Services, there is a persistent pattern of peacekeepers not intervening when civilians are under attack.

How do we resolve these problems and contradictions? How can peacekeeping operations be kept true to their noble aims in the quagmire of intractable and cruel conflicts around the world? The protection of civilians, as Secretary-General António Guterres said in his remarks, will continue to be a key priority of peacekeeping. How can we harmonize that crucial goal with the need to give peacekeepers clear and realistic mandates?

Now, as part of Meridian 180’s work on global issues, we are proud to present a conference on peacekeeping that brings together some of the preeminent experts in the field of peacekeeping and the protection of civilians. We will draw from the best of both theory and practice to add to the conversation about peacekeeping operations in the hopes that we can find a way in the crossroads toward both humanitarian ideals and pragmatic sustainability.

Professor Sukehiro Hasegawa, President of the Global Peacebuilding Association of explained how the noble idea of protecting civilians resulted in the mass killings of internally displaced persons in the Kibeho camps in Rwanda. 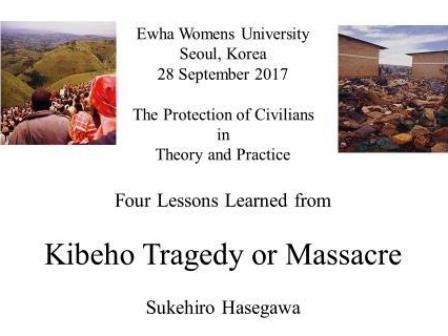