Prof. Ai Kihara-Hunt of Tokyo University elaborated on the legal development related to sexual violence during the conflict and recommended on how to better prevent further SEA by UN personnel. 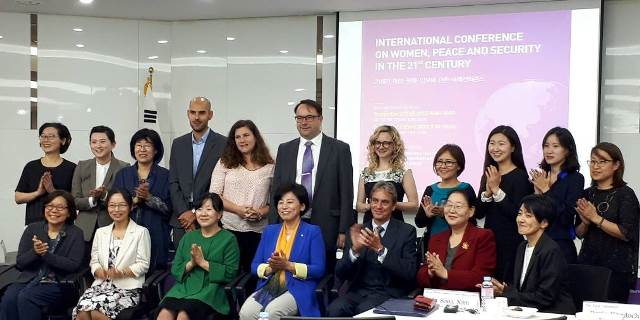 An International Conference on Women, Peace and Security in the 21st Century jointly co-organized by Friedrich Ebert Stiftung, the International Journal on Peacekeeping and Korean Women’s Development Institute was held to provide an East Asian perspective. Six sessions of the conference addressed the foundation of the UN and women, peace and security, advances made on women in conflict situations and in peacekeeping/building, sexual violence in conflict, the way forward on sexual abuse of women, means to enhance gender equity in peace and security, national plans of action, and civil society involvement.

Session I laid out the foundation on the conference theme. After the general foundation on gender and peace was explained by Prof. Lee Jeoung Oh of Daigu Catholic University, Prof. Kihara-Hunt elaborated on the legal development related to sexual violence during the conflict. She explained that since the 1990s, various forms of sexual violence have been recognized, codified and prosecuted as international crimes, including genocide, crimes against humanity and war crimes. The contribution of international tribunals has been analyzed, including the development of the definition of rape. She addressed that there has been a significant progress in the prosecution of sexual violence, but challenges remain. In addition, she introduced human rights obligations on States in relation to sexual crimes domestically, touching upon prevention, investigation and prosecution, and emphasized that these obligations remain during the conflict. Ms. Gaelle Demolis of UN Women then explained relevant UN resolutions, including Security Council 1325 and its implementation. 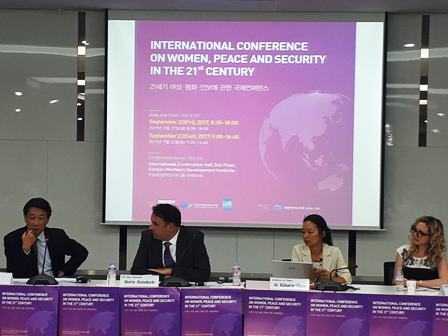 Session III was focused on prevention and actions related to sexual violence in conflict and in UN Peace Operations. Prof. Oh Joon of Kyoung Hee University discussed the role of conflict prevention, sharing his experience as Ambassador engaging at the UN Security Council. Dr. Roisin Burke explained the current framework and shortcomings related to prevention and prosecution of sexual crimes committed by UN military contingents. Prof. Ai Kihara-Hunt provided recommendations on how to better prevent further SEA by UN personnel, based on her five-year research on how to improve criminal accountability of UN police personnel. Her specific recommendations were around five areas: getting the right people on the ground, ensuring that all information reach an appropriate investigative body, law and internal policies, investigation, and ensuring prosecution. Throughout her detailed recommendations, she emphasized that transparency would be the key.

Session IV addressed means to enhance gender equity in peace and security. Lieutenant Colonel Nyamsuren Chultem of the Ministry of Defence, Mongolia, introduced her experience with UN missions. In her speech, she touched upon pre-deployment training, expectations, daily tasks in the mission, benefit of having female officers and various mandates. Prof. Choi Yunmi of Sookmyoung Women’s University analyzed how gender equity has been incorporated in peace and security agenda in South Korea. She cautioned that securing a number of women involvement in peace and security does not necessarily contribute to women’s perspective being incorporated in the agenda.

Session V was on Japan and Korea’s national plans of action (NAPs) related to Security Council resolution 1325. Ms. Hisako Motoyama of Civil Society Working Group for Japan and Ms. Lee Hyun Sook, Women’s Forum for Peace and Diplomacy, South Korea, explained the process of formulating respective NAPs and their status of implementation. It was found that, although Japan and South Korea had different models of engagement with the civil society in the process, their outcomes had similarities. While some civil society recommendations were heard by the two governments, a significant part was lost.

A large portion of the conference is scheduled to be published in the due course.