Mr. Akashi suggested the Japanese people should think seriously of what Japan can and should do to build a more peaceful international society based on law and justice. 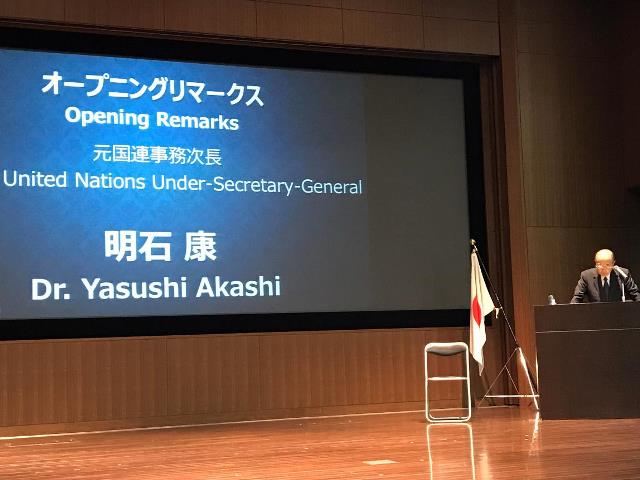 A summary of the opening remarks made byMr. Yasushi Akashi

When the PKO Act (Act on Cooperation with United Nations Peacekeeping Operations and Other Operations) was being considered 25 years ago, Mr. Yasushi Akashi was serving as the Special Representative of the Secretary-General and Head of the United Nations Transitional Authority in Cambodia (UNTAC). He witnessed Japan’s first full-scale deployment of its peacekeeping personnel abroad. Although a Japanese police officer and a UN volunteer died on duty, Japan`s participation in the United Nations peacekeeping operation made a generally positive impression.

Mr. Akashi explained that UN peacekeeping operations had not been stipulated in the UN Charter, but they had become one of the most prominent activities of the United Nations, given its scale and impact. Peacekeeping was now an indispensable means for the maintenance of peace by the United Nations. Within UN peacekeeping operations, Japan could contribute in many ways : in rehabilitation and reconstruction projects; in the repair and construction of roads and bridges; in the development of judicial system; transport and communications, making full use of science and technology; and in the training of human resources related to peacekeeping.

Peacekeeping also encompasses international and domestic issues. First, concerning the authority to use weapons, Japan’s unique “five principles” for participation (in PKO) needed to be consistent with the internationally recognized “three principles” of UN peacekeeping. Second, as peacekeeping activities were joint activities of UN member countries based on the broad consensus of the international community, peacekeeping could not develop into “acts of aggression.” Although it was most unlikely that there would be a conflict with the Constitution of Japan, a broader national debate might be necessary in this regard.

To sustain peace and security in the international community, Mr. Akashi said it was natural to carry out the responsibilities and roles appropriate for Japan, and it was desirable to take a forward-looking and positive attitude especially regarding UN peacekeeping operations or the multinational forces approved by the United Nations. In order to build a more peaceful international community based on law and justice, it was high time that the Japanese people thought of what they were being asked for and what they should do, on this 25th anniversary of the enactment of the PKO Act.